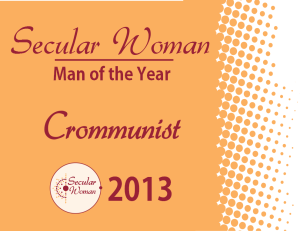 Among the foremost of these is the idea of ‘equality’, and what that means to us. To some, equality means nothing more than “treat everyone the same”, a definition that seems laudable at a superficial level but which, upon any amount of honest scrutiny, is deeply flawed. We do not live in a world where a ‘level playing field’ exists. We live in a world in which individuals are treated according to shopworn stereotypes about the social group they belong to; whether that is race, class, sexuality, and of course gender. In many cases, such treatment happens even in the absence of intentional or conscious malice. The forces arrayed against members of minority groups are simply not the same as those arrayed against the majority, and an “equal” response to those forces will only serve to perpetuate these discrepancies. END_OF_DOCUMENT_TOKEN_TO_BE_REPLACED

One of the more popular criticisms of Muslims that can be found within the atheist community takes the following form:

Sure, not all Muslims commit acts of violence; however, they do not speak out against it, because they know that the violent actors are adhering to the true nature of the religion.

The latter half is omitted as often as it is included, but the subtext of “moderate Muslims don’t speak out against violence committed in the name of Islam” does not really permit many interpretations beyond that conclusion. It is seemingly predicated on a belief that a plain-text reading of the Qur’an leads to the clear conclusion that violence against non-believers is permitted.

Never mind, of course, that the opposite is true.

Similarly untrue is the assertion that moderate Muslims do not speak out against terrorism, as Qasim Rashid explains: END_OF_DOCUMENT_TOKEN_TO_BE_REPLACED

Our beleaguered and religion-soaked cousins south of the border may, from time to time, look northward with envy at Canada’s largely non-religious civil society. Our politics are not replete with the same invocations to the intercession of the supernatural that plague the American landscape; indeed, it is considered somewhat gauche in most circles to make large public shows of one’s private belief. Canada’s approach to religion is largely a ‘live and let live’ one, with the exception of certain rural areas where religious affiliation is held in the same grip as one’s self-identity.

As I’ve discussed at various points in the past, this laissez faire approach to religion has not stopped the Republican North government of Stephen Harper from deciding that Canada’s international role should be to protect religious freedom, despite the repeated warnings of those American officials who have tried the same and realized what a mine-field it becomes. An entirely unnecessary ministry has been created in order to oversee Stephen Harper’s desperate attempt to look after the evangelical base that he needs to be re-elected, but whose actual priorities (destroying women’s health care, legislating Biblical morality) he cannot espouse for fear of triggering a centrist backlash.

Yesterday, while discussing this mission, MP Scott Reid had this to say: END_OF_DOCUMENT_TOKEN_TO_BE_REPLACED

There has been a great fracas recently within atheist/secularist circles as ‘Horseman’ Sam Harris has been subjected to repeated critique* as the avatar of a disturbing trend within atheist circles: using “reason” to mask anti-Muslim sentiment in politically pallatable language. I have noted this tendency previously:

I don’t think anyone could confuse me with someone who is pro-Islam. As much as I find all religions repugnant, the face of Islam we see today is one of repressive fanaticism that stifles human progress. To be sure, there are plenty of examples of fanaticism in Christianity as well, to say nothing of Hindu and Buddhist repression happening in India and other parts of Asia. Whether it is due to anti-Muslim bias and the collision of Islam and secularism in Europe, or a reflection of the true excess of Islamic regimes, the news consistently carries stories of Muslim-dominated countries carrying out horrible acts with the excuses of Qur’anic license on their lips. I will not relent or shrink from criticizing this inhuman (or perhaps all-too-human) display of authoritarianism with claimed divine mandate.

That being said, there is a backlash against Muslims that is not based on their beliefs per se, but about our attitude about the danger that Muslims (and Islam) pose to the world. This attitude is not informed by evidence, but fueled by paranoia and misinformation. It qualifies, by every comparative standard that I can think of, as just as worthy of criticism as racism, sexism, transphobia, homophobia, take your pick.

My concern is that atheists find it far too tempting to single out Islam for particular opprobium because the stories we hear about Islamist-dominated countries are so dramatic. We conclude from the drama that Islam per se is a particularly twisted ideology, above and beyond the ideology of, say, Christianity. My counter-claim to this assertion is that Christianity contains essentially all of the same commandments and prohibitions and exhortations that Islam does, but time and the rise of secular society have rendered it, in the aggregate, less overtly oppressive than the current incarnation of Islam (again, in the aggregate). END_OF_DOCUMENT_TOKEN_TO_BE_REPLACED

Earlier today, I wrote a quick summary of this morning’s Supreme Court of Canada majority decision that says judges may require witnesses to remove their niqab to testify in court. The majority laid out some specific issues that should be considered when making such a decision, including the broader social context of requiring victims of abuse to violate their religious beliefs in order to see justice, and the “chilling effect” that such a practice may have. In this post, I want to briefly touch on the two dissenting positions, and provide some of my own thoughts and concerns. END_OF_DOCUMENT_TOKEN_TO_BE_REPLACED

Back in the early days of this blog, I talked about an Ontario court case involving a woman who did not want to be compelled to remove her niqab (a Muslim face covering) in order to testify against two of her family members who she accused of sexually abusing her over a number of years. I thought it was an interesting case for those of us interested in how to properly build a secular society that respects personal expression but does not kowtow to every religious cause under the sun. I said this at the time:

For once, I don’t have a clear-cut answer of what the court should do. On the one hand, testifying would have deleterious effects on the plaintiff and possibly cause her to lose her family and social life; it would most certainly deter other abused women from coming forward after they see that the consequence of speaking up is social isolation (and possibly more abuse). On the other hand however, allowing her to wear the veil not only violates the right of the accused to confront their accuser face-to-face, but implicitly assents to the practice of veiling women.

The case found its way to the Supreme Court of Canada, who handed down their decision this morning. I have, on several occasions, expressed my deep respect and admiration for Canada’s Chief Justice Beverley McLachlin, who wrote for the majority in the 4-2-1* decision, finding that while the Canadian Charter of Rights and Freedoms (equivalent to the U.S. Bill of Rights) does explicitly defend a person’s right to freedom of religion, it also explicitly defends the rights of the accused. As such, the decision prescribes a series of test questions that must be satisfied before requiring a woman to remove her niqab to testify.

Disclaimer: the central metaphor of this post is scatological, so if you have a particularly weak stomach, might I suggest you watch this video instead.

There is a far-too-common meme that exists among a subset of the nonbelieving community that goes more or less like this:

Well of course religion has led people to do bad things. Nobody is denying that. And I certainly don’t believe there’s any truth to it, but some people believe sincerely and do good things. It’s therefore neither fair nor is it accurate to paint all expressions of religion with the same brush. Religion has inspired people to do great good, as well as great evil.

Perhaps one of the most celebrated of those holding this opinion is Chris Stedman, who has published an excerpt from his upcoming book ‘Faitheist’ at Salon: END_OF_DOCUMENT_TOKEN_TO_BE_REPLACED

We recorded a second ‘episode’ of our podcast experiment this past week, and invited journalist and superstar atheist Jamila Bey to join us for a discussion of the results from a recent Pew Forum survey that shows that religious ‘nones’ represent an all-time high of 20% of the American population.

The video is below the cut: END_OF_DOCUMENT_TOKEN_TO_BE_REPLACED

Oh neat! It’s time for one of my rare (but fun) retractions!

Last Monday, I put the boots to James Croft for a conversation we had over Twitter. To summarize, I thought that his advocacy for increasing the use of song as part of humanist gatherings was a) offputting, and b) dangerous. A, because there are a lot of people who identify as humanist after fleeing religion, and that adding secular hymns to humanist functions was going to make those people intensely uncomfortable and unwelcome. B, because the function of liturgical music is to make messaging more palatable by bypassing the rational parts of the brain, and that rationality is what makes humanism more than just “religion for atheists”.

James took his time in responding, but when he did, he kicked my ass: END_OF_DOCUMENT_TOKEN_TO_BE_REPLACED