I received an invitation to provide comment on a piece that was going up in Religion News about whether or not Richard Dawkins is an ‘asset’ or a ‘liability’ to ‘movement atheism’. The author chose not to use any of my comments (or to ask me any follow-up questions), which was her prerogative, albeit a decision I am personally disappointed by. What follows is what I wrote in response to the invitation, with slight edits that I will explain as a post scriptum.

As I said in my earlier e-mail, the answer to your question is “no”. Richard Dawkins is not an asset or a liability to movement atheism. The question makes a number of presumptions that I think are ultimately misguided.

First, movement atheism doesn’t have a single set of goals. Unlike pro-choice activism or civil rights activism, the atheism movement has several goals, some of which are in direct contradiction to others. Many within the movement are working for church/state separation, others are looking to establish atheist communities as an alternative to the religious monopoly on communal organization. Still others simply want to be able to openly be atheist without having to hide their nonbelief, while others are actively involved in developing counterapologetic arguments to ensure that religious claims do not go unchallenged. These are all activities of “movement atheism” that are not aimed at an overarching shared goal. “Movement atheism” therefore cannot and should not be thought of as a unified group that any individual could be an asset or liability to. END_OF_DOCUMENT_TOKEN_TO_BE_REPLACED

Longtime readers may remember that religion used to be a primary, rather than incidental focus of this blog. It may be the case that writing for Canadian Atheist and then moving to Freethought Blogs took some of the fun out of being a combative atheist. It could just be that I had more pressing questions rattling around in my brain. At any rate, I haven’t done a pure religious critique in a while, so pardon me if the rust shows through.

I read the Old Testament when I was in high school. Being a longtime fan (and voracious reader) of Greek mythology, I immediately recognized the stamp of myth on the stories of Jonah and the Giant Fish, Noah’s Ark, the Walls of Jericho, you name it. Stories are important cultural signifiers that transcend generations and give us some common ground. It didn’t strike me as particularly peculiar that a group of nomadic people whose written language arrived many generations after many serious events in their history would have kept their history alive in story form. It seems equally non-controversial to imagine that, as stories tend to do, the histories and the fables and legends became blended over multiple tellings. For someone who, even at the time, wasn’t a literalist believer, the idea that a literal super-strong Samson probably didn’t actually exist in the way he’s depicted didn’t matter much to me. What was important were the lessons of the Bible. It would take me a few more years to realize how monstrous many of those lessons actually are.

Similarly and non-coincidentally, I began to view the New Testament as a work of fictionalized history. At the time I thought Jesus was probably literally real, and that the writing in the Gospels needed to be viewed in context of the politics of the time. Understanding the tension that would have existed between, for example, the Pharisees and the Roman Empire at the time, helped put things like the Sermon on the Mount into a reasonable context – Jesus wasn’t speaking for eternal attribution, he was talking about the issues of the time. Judas wasn’t some evil conniver, he was a run-of-the-mill political zealot who sought to install new leadership by betraying the old one. And so on, in a most run-of-the-mill sort of way. END_OF_DOCUMENT_TOKEN_TO_BE_REPLACED

Among the foremost of these is the idea of ‘equality’, and what that means to us. To some, equality means nothing more than “treat everyone the same”, a definition that seems laudable at a superficial level but which, upon any amount of honest scrutiny, is deeply flawed. We do not live in a world where a ‘level playing field’ exists. We live in a world in which individuals are treated according to shopworn stereotypes about the social group they belong to; whether that is race, class, sexuality, and of course gender. In many cases, such treatment happens even in the absence of intentional or conscious malice. The forces arrayed against members of minority groups are simply not the same as those arrayed against the majority, and an “equal” response to those forces will only serve to perpetuate these discrepancies. END_OF_DOCUMENT_TOKEN_TO_BE_REPLACED

This conversation continues from one that happened on Twitter.

Blake, my interlocutor, sent me this e-mail as a way of expressing his arguments and concerns more clearly: END_OF_DOCUMENT_TOKEN_TO_BE_REPLACED

This is a session I hosted for the Freethought Blogs online conference, FTBConscience. A panel of atheists discussed what’s happening in Canada, and how Canadian experiences might differ from those of Americans.

Horror films are a wonderful source of escapism, where we can feel the thrill of terror in the relative safety of our living rooms or a crowded movie theatre. One of the all-time classics within the horror genre is the zombie movie: hordes of shuffling, shambling atrocities hell-bent on devouring the flesh of the still-living. One of the iconic images of any good zombie movie is the panic-stricken victim of a zombie bite who is slowly turning from human into monster, as all morality and reason drains from their body while their comrades feverishly debate whether or not to put their erstwhile friend out of hir ‘misery’ courtesy of a well-timed shotgun blast to the face.

So today I want to talk about labels. I don’t mean those things your passive-aggressive roommate puts on each egg in the carton in the fridge you share (yeah that’s right Gary, I’m talking about you! Eggs are like 20 cents apiece – get over it!). I am talking about the labels we use to describe ourselves and each other. We use labels when we discuss ethnicity, philosophical or political affiliation, religion, gender, you name it and we put a name on it. It’s what we do. END_OF_DOCUMENT_TOKEN_TO_BE_REPLACED

Mixed news for fans of the podcast Point of Inquiry with Chris Mooney and Indre Viskontas. This just arrived in my inbox:

On Friday, Point of Inquiry’s two co-hosts—Indre Viskontas and Chris Mooney—resigned from their positions at the Center for Inquiry. On Monday, Point of Inquiry producer Adam Isaak followed suit. This note is to explain our reasons for departing CFI and our future plans.

In May of 2013, when the Women in Secularism II conference took place in Washington, D.C., Point of Inquiry—the flagship podcast of the Center for Inquiry—was more successful that it has ever been. Following a format change in 2010, our audience has increased by 60 percent and our growth rate has doubled in the last year and a half. We’d recently done a highly successful live show featuring Steven Pinker before a packed room at the 2013 American Association for the Advancement of Science meeting, and interviewed guests like Oliver Sacks, Jared Diamond, Paul Krugman, and Mary Roach. We had started to incorporate new, successful video content. 2013 featured our most listened-to show ever and we were averaging well over 2 million total downloads per year.

Then came the events at that conference—including a widely criticized speech by Center for Inquiry President & CEO Ronald Lindsay. Lindsay then went further, writing a blog post which referred to a post by one of his critics—Rebecca Watson—as follows: “It may be the most intellectually dishonest piece of writing since the last communique issued by North Korea.”

In response to public criticism of Lindsay’s speech and blog post, CFI’s Board of Directors issued an ambiguous statement regretting the controversy, but going no further than that. END_OF_DOCUMENT_TOKEN_TO_BE_REPLACED

In light of the recent furore* over CFI’s bafflingly vacuous response to Ron Lindsay’s behaviour, some prominent members of the freethinking community have decided to pull back their participation in an organization that they see as not adequately representing their values. Some have even gone so far as to encourage others to do the same. This is pretty much boilerplate activist behaviour: someone says or does something unacceptable, you don’t patronize or support them anymore. We applauded it when Chick Fil A’s Dan Cathy made homophobic statements and people stopped buying his chicken. We applauded it when Rush Limbaugh said… well, basically the stuff he always says, but this time we paid attention.

And yeah, maybe boycotts don’t always work, and maybe they’re often impractical what with megacorporate ownership of pretty much everything, but they’re a pretty non-controversial method of expressing displeasure with someone or some entity whose actions you strongly disagree with.

Unless, of course, you’re criticizing CFI and Ron Lindsay, in which case it’s a “witch hunt”. 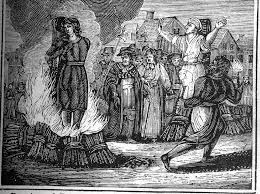 Now, to be sure, this is not the only circumstance under which I’ve seen this comparison dredged, unwillingly, into a place it doesn’t belong. It is, however, a distressingly common circumstance to see people decry any and all criticisms of or actions taken against someone who is on ‘their team’ as a “witch hunt”. Oftentimes they will invoke the ghost of old Joe McCarthy, and generally bloviate about how innocent people are being dragged through the muck by (fill in the blank). END_OF_DOCUMENT_TOKEN_TO_BE_REPLACED