I have more or less given up on expecting that religious folks will recognize the inherent contradictions between their secular morality and their religious instruction. We all have blinders about our own bad behaviours and illogical thoughts, but religion is particularly protected from introspective self-scrutiny. Matters religious are supposed to be believed “just ’cause”. Faith demands that we suppress our instinct to reject those things which are logically impossible or unsupported by evidence and simply accept a particular dogmatic instruction. Thus is a capacity for doublethink built, and with it a resistance to see hypocrisy as in any way problematic.

That being said, I am repeatedly fascinated by the way in which many “moral” principles that are described along religious lines come into conflict with secular moral principles that can be derived philosophically. Human beings use a variety of sources to determine right from wrong, and we’ve developed methods of decision-making when circumstances present us with a novel situation or a contradiction. How do we do the right thing in a circumstance we’ve never encountered before? Can we draw a parallel to something we’ve seen before? What happens when rule X and rule Y come into conflict? Do we discard one rule? Both? Is there some nuance we can find?

Such ethical wheeling and dealing is a necessary fact of life in a world that throws all kinds of challenges our way. Bound within certain ethical frameworks about the definition of ‘the good’, we can find ways to make decisions that satisfy our innate desire to feel good about ourselves. However, this kind of nuanced thinking is denied to us when we adhere to regulations that we see as inerrant. If we must follow the rules, we have no recourse when, for some reason or another, we find the rules in conflict with each other.

One of the most dramatic examples of this phenomenon happens when people begin bloviating about the “sanctity of marriage”. Marriage is never so important or so sacred or so inviolable as when we are fighting to ensure that gay people can’t have it. Now you can feel free to take your pick of what your favourite contradiction is in this fight, whether it be about how Kim Kardashian’s marriage doesn’t threaten society but Barney Frank’s does, or how the same arguments used against interracial marriage is a “totally different thing” (for reasons that are never given). The argument doesn’t have a leg to stand on, so most of it is low-hanging fruit.

The delicious morsel that I’m going to fricasee today has to do with two ideas that are alternatively held up as part of the conservative Christian moral instruction manual. The first is that recognizing gay marriage will undermine the sanctity of heterosexual marriage. That by allowing gay people to “redefine” marriage as anything other than one man and one woman will attack the very social fabric of western civilization. The second position is that if a young man impregnates a young woman ‘out of wedlock’ (which is a term that seems to insult the institution of marriage far more than anything else), it is his duty to marry her*. Give the child two parents and a stable home environment.

The first one is obviously nonsense. We’ve redefined marriage countless times over the course of our history: 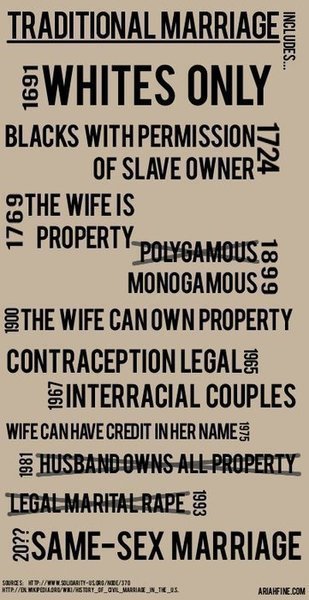 Other cultures that are not part of the American mainstream have defined marriage in a variety of ways. We may not accept many of those ways, but even within our own history we have not seen the steady “tradition” that is repeatedly asserted to be an inviolable component of our cultural bedrock.

I am far more sympathetic to the second one. Obviously, one shouldn’t be forced into marrying anyone else, but if the decision is made to bring a pregnancy to term, there will be a child. The more adult supervision that child has, the better. Then again, if the home environment that those two adults create is a poisonous one, marriage doesn’t make anyone’s life better. As far as I can figure, two siblings that get along with each other would do a better job of raising a kid than reluctant parents forced into a marriage due to some inadvertent DNA mingling. There’s absolutely no reason to imagine that children raised by a parenting team that doesn’t play nice together (but shares DNA) will somehow flourish better than if they were raised in an environment that models mutual respect, love and understanding.

The kids who are raised in these families that are thrown together through a combination of moralistic hectoring and force are part of the same society that the anti-gay crusaders claim to be defending from the evils of moral decay that gay marriage represents. We do indeed have a duty to ensure that children grow up in an environment that is safe and supportive. It is to the benefit of us all that children born into our society are well-fed, well-educated, and well cared for. Gay marriage doesn’t threaten that, but forcing families into existence against their will absolutely does.

We are left with a circumstance where Rule #1 and Rule #2, however sound or unsound, are in conflict with each other. We recognize that gay couples getting married poses no threat either to heterosexual marriage (since it has survived many similar and more dramatic revisions already) or to the raising of children (since there are many examples of non-heterosexual parenting groups that do just fine). Furthermore, strictly enforcing Rule #2 does pose a threat to heterosexual marriage (by undermining the institution’s credibility) and to the health and well-being of any children raised in that environment (not necessarily, to be sure, but more so than voluntary pairings would).

For a person with a brain in their head, this is not a difficult problem. We recognize the intent of the rules – maintenance of society’s duty to children – and discard the parts that don’t serve that intent. We either drop our opposition to gay marriage, or abandon our insistence that accidental dads be forced into marriage. Obviously, my position is to dismiss both rules, but you only have to drop one in order to avoid being a hypocrite. Then again, that assumes that you care about not being a hypocrite.

* I am intentionally ignoring the reciprocal possibility that the woman is forced to marry the man. While this undoubtedly does happen, the argument very rarely breaks along these lines. The proponents of this ideology base their argument on the assumption that a pregnant woman wants to get married (and that all women do). To avoid accusations of tangential refutation, I will discuss and defeat this position on its own territory.