The following post is a continuation of a discussion we began this morning, looking at a paper by Daniel Effron and colleagues. In it, the authors conduct a number of experiments to investigate a phenomenon in which white people demonstrate a tendency to use salient examples of being “not racist” (choosing not to accuse an innocent black people in favour of a more guilty-seeming white person of a crime) to license more racist behaviours in the future.

The fourth investigation the authors conducted invited people to try and remember the number of racist decisions they didn’t make, after presenting them with statements that were either clearly racist, ambiguously racist, or racially ambiguous (i.e., no racial content). The authors hypothesized that, given a clear-cut and obvious example of a time when they were “not racist”, the drive to appear “not racist” would be satisfied, thus obviating the need to introduce “not racist” narratives into their memory. In other words, if you have a ready memory of choosing not to be overtly racist, you will have less motivation to seem “not racist” in a subsequent decision.

To test this, participants were invited to make similar accusations of guilt between a number of suspects, some of whom were black and some of whom were white. No black ‘suspect’ was likely to be guilty of the crime (had a strong alibi, no material evidence, co-operated with police, etc.) whereas some white suspects were likely (had weak/no alibi, had weapon on their person, was hostile, etc.). After that task, participants were asked to rate their agreement with a number of statements, of the type “X is more likely to be criminal/violent than Y”. X was worded “Most blacks/Some blacks/Some people”, varying between questions and participants. Y was worded “Whites/Some whites/other people”. Clearly, some of these statement combinations turned out to be blatantly racist, others were ambiguously racist (are some blacks more likely to be criminal than some whites? Maybe…)

After the second task, participants were asked how many times they had been presented with the opportunity to accuse a black suspect but had chosen a white suspect instead. Keep in mind that all of the black suspects in this study were innocent: 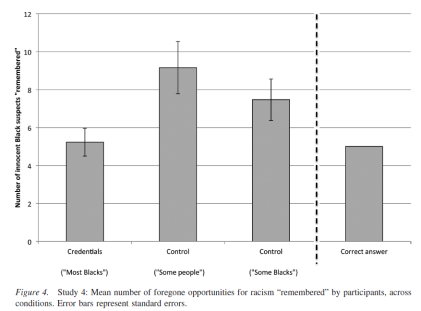 What we see in the above figure is that when people were asked to consider statements that seemed racist (but were not obviously racist), they took psychological comfort in remembering the many times that they had been “not racist” in the recent past – even when those times didn’t actually happen. In other words, people experiencing cognitive dissonance over their racial uprightness revised their memory and invented “not racist” decisions to assure themselves that they were ‘pure’.

Exploring this further, the authors conducted another experiment in which the suspects were racially ambiguous (i.e., it was not immediately clear from the provided pictures that the person was black or white). As you might expect from the previous findings, participants were more likely to identify the innocent suspects as being black when they were presented with racially ambiguous statements than those who had rejected clearly racist statements. Put another way, participants revised their own memories to create opportunities to assure themselves that they were “not racist”.

Finally, a set of participants were asked to write an essay in which they defended either a racially ambiguous statement (the ones chosen were the statements from the previous study that had the highest levels of disagreement) or a similar statement that was racially neutral (about whether teenagers were more criminal/violent than people over 30). They were also asked to complete a task in which they had to accuse a number of suspects whose race was ambiguous. As previously observed, people who were asked to defend a position that might make them look racist, they ‘remembered’ exonerated suspects as being blacker.

I understand the dilemma that our current understanding of race presents people in majority groups: few people feel comfortable with the idea that they might be racist, and yet we often find ourselves espousing beliefs or engaging in behaviours that may seem racist. There are a number of ways in which people resolve this internal conflict: some simply attack the definition of ‘racist’, others engage in angry, feverish denials of the implications of their behaviour, and as we see in this study some will quietly assure themselves that they’re not racist by conjuring (sometimes out of thin air, evidently) memories of times when they avoided blatant racist behaviour.

What lessons can we take away from this study? Well first of all, we should be particularly attentive to the fact that participants in all of these studies rated low on measures of overt prejudice. This wasn’t an example of what “racists” do compared to what “non-racists” do – this is about an implicit and subconscious process of what the authors call “moral licensing”, where a foregone opportunity to be bad makes us feel justified in exhibiting behaviours that we might not otherwise consider permissible.

Perhaps it is because racism is seen as a moral failing rather than a cognitive failing that this kind of licensing occurs. If racist behaviours were contextualized as the product of bad ideas rather than bad people, would these differences disappear? That is my basic suspicion, and I would like to see some investigation of whether it is possible to manipulate the moral component of racism, and what effect that has on implicit-based racism. It would also be worthwhile to see if this behaviour exists in non-white groups toward white groups – my guess would be that it is not symmetrical (i.e., black participants won’t demonstrate the same moral licensing that white participants did), but it would be interesting to see that demonstrated.

Further, I am curious as to whether an additional behaviour – that of self-effacement in the presence of racially ambiguous situations (i.e., an arch-liberal tendency to non-rationally favour black people as a method of demonstrating “non racist” beliefs) can be observed experimentally.

Many of the behaviours demonstrated by people who have been accused of racism comes into focus once we recognize that ‘racist’ is not seen as a descriptive of behaviour, but rather as a moral condemnation. I feel that this use of the term ‘racist’ prevents us from addressing the issue accurately, as it causes us to retreat into a posture that defends our self-esteem, rather than causing us to examine our motivation. The answer is not, as some suggest, to stop using the term ‘racist’, but to do a better job of identifying what ‘racist’ actually means, rather than what we’ve come to believe it means.

What this study demonstrates fairly clearly is that, as long as we continue to make the conversation about “racists” and “not racists”, we’re going to see excuse after fabricated excuse brought into the conversation to safeguard our self-esteem. Any progress we want to see on this issue will require us to have an evidence-based (rather than tradition-based) understanding of what racism is and how it works.

And that will make all the difference.