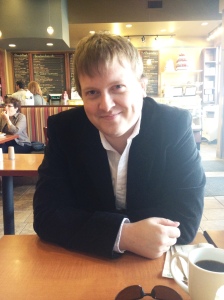 So the other day, I had written a post that was supposed to be about the strange dance away from logic that seems to be common on the fringes of the raw, organic food lifestyle (ROFL). What I ended up with however, was an extended detour into the social fascination with the concept of ‘authenticity’. I’m sure you know what I’m talking about here, the sort of ‘authenticity’ that leads people to buy clothing made by hand in the Peruvian mountains by semi-nomadic alpaca herders, because by doing so they were being more ‘authentic’ and less ‘fake’ or ‘consumerist’.

I have no problem with Peru, or mountains, or nomads or alpacas, and I have nothing but good things to say about herders of all kinds. My fascination was with the people who buy their products – or perhaps more specifically, those particular beliefs that spur people on to seek out ever-more ‘alternative’ lifestyles. There’s a scene in the Ben Stiller movie “Zoolander” where Hansel, a model played by Owen Wilson, is describing a particularly vivid memory he has of his wild and adventurous life. He describes  mountain climbing in some far away nation, and recounts the extreme danger that he was in, before revealing that he was in fact remembering a particularly vivid hallucination brought on by the heavy use of peyote. He was confused because, we are told, Hansel’s life is so wild and adventurous – so real, that the fictional mountain climbing adventure could have been something he had actually done. Hansel has put his money and status to good use, by embarking on a campaign of living life authentically. Oh, and while he was remembering this experience, he was baking artisan bread in a wood-fire stone oven located in his industrial-loft apartment. Owen’s character was the embodiment of nearly every trope and cliché associated with the idea of living ‘authentically’.

In his book “The Authenticity Hoax: How We Get Lost Finding Ourselves”, author and philosopher Andrew Potter alleges that the urge to seek out increasingly alternative ways of living – of being – is the result of a deep-seated discomfort with being a part of society – with conforming. For Potter, the increasingly bizarre social movements, fads, and ‘counter-cultural’ expressions of identity reflect a sort of dissatisfaction with contemporary society, and are the manifestation of a desire to ‘opt out’. This is hardly revelatory; where it gets interesting is when we look at consequences. The problem with their solution is that because people have been so thoroughly socialized by their culture – because they have internalized and normalized conventional patterns of consumption – they wind up reproducing those social conventions which they originally sought to reject. In order to protest and ‘opt out’ of a culture of consumption, some people end up instead consuming alternative lifestyles. They consume ‘traditional, authentic’ yoga classes instead of the more mainstream yoga classes (and pants) that are offered everywhere; they purchase Tibetan singing-bowls and alkaline water treatment devices or take courses in Ayurvedic medicine and Pranic healing. They buy packed and sealed dirt floors for their multi-million dollar beach-front homes, and endlessly consume seminars, retreat packages, and shamanic rituals (and the associated cultural expropriation) in order to feel connected to more ‘authentic’ expressions of individuality. But why are these things more ‘authentic’ than, say, taking a karate class in the basement of the local community centre? Why is a packed dirt floor so much more ‘authentic’ than laminate or hardwood? Why are ‘vision quests’ at energy vortices in Nevada more ‘authentic’ than getting high on acid in a hot tub on your patio?

Alternative lifestyles are often expensive; the retreats, treatments, cleanses, courses and seminars are part of a multi-billion dollar industry – a consumer society that is often indistinguishable from more traditional patterns of consumption. It takes a certain amount of free time and disposable income in order to fully immerse ourselves in our alternative lifestyle of choice, and that time and capital can be an insurmountable barrier to many people who might want to be included. There are relatively few poor or socially disadvantaged people making annual trips to Sedona. The attendees at the (in)famous Ramtha School appear for the most part to be white, middle or upper-middle class people, for example. Having the time and resources to attend such events and locales is beyond the reach of many, and it’s probably just as well – who wants the plebs coming in and bringing us all down with their poorness?

The ultimate aim of the search for authenticity seems to me to be the explicit rejection of mainstream consumer culture; if we can distance ourselves enough from what everyone else is doing, we can claim the right to be called an individual; we can cast off the title of ‘consumer’, and embrace a way of living that is more authentic, hence more ‘real’, and therefore more True. And this is where the real source of tension exists, because by rushing to embrace these alternative lifestyles, we also tend to rush out and buy the associated trappings. We tear out our hardwood floors and replace it with Amazonian river mud, or we embrace our new shamanic existence by dropping a few thousand dollars on a spiritual retreat. In short, we declare our rejection of consumer culture by choosing to employ a new pattern of consumption. We consume the trappings and accoutrements of our new alternative lifestyle, and while doing so consume the fantasy that we’ve left consumerism behind. It is a paradox, but it is one that was predicted more than a century ago.

In what is arguably his most famous work, “The Communist Manifesto”, Karl Marx stated that the bourgeoisie – the capitalist class – is the most revolutionary class in society, because in order to maintain its dominance over the proletariat – the working class – it must continually reinvent itself in new and novel ways. In the context of contemporary consumer culture, the capitalist class and their corporate entities re-imagine themselves on a nearly constant basis in order to maintain the dynamo of consumerism which drives the economies of the Global North. As new and novel countercultural movements emerge, they are invaded by and subsequently inculcated in the ever-changing consumer culture. The organic food movement for example, arose partly in response to the domination by industrial agri-business of the agricultural sector; now many of the largest organic food companies are virtually indistinguishable from the industrial farming corporations the movement sought to oppose. In music, the punk-rock counterculture of the 1970s and 1980s was harnessed, tamed, polished, and re-released by major record labels so that where once we had the Ramones, the Sex Pistols, and Sid Vicious, now we have Green Day and Sum41. In what could be considered the cruelest of ironies, the desire to oppose consumer culture may result in these newfound and ‘authentic’ lifestyles being co-opted and rendered mainstream.