When I initially started this line of argumentation 4 weeks ago, I hadn’t planned on making it a 3-parter, but such is life I suppose.

In the first part of this series, I asked you to engage in a thought experiment in which a population with a distribution of strength/types of belief in a god/gods are exposed to a strong argument against belief. My assertion was that a strong dissonant position would push the overall population away from belief and toward disbelief, even if there were no ‘strong’ believers convinced to change their position: 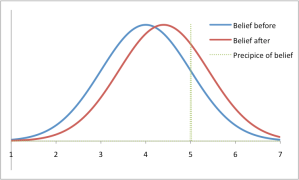 In the follow-up, I refuted 3 general objections to using confrontation in argument. The first is that people who cling more tightly to their belief if you aren’t nice to them aren’t in the market for a persuasive approach grounded in logic anyway, so trying to convince them is a wasted effort. Second, to postulate that confrontation is “counter-productive” assumes that more people move away from nonbelief when confronted than toward it, when it is more likely that people will simply remain where they are on the continuum of belief if they hear an argument they don’t like. Third, people seldom change their minds on a position in one stroke – it usually happens over time, and confrontation helps plant seeds of dissonance that can blossom into full-blown doubt.

There is a 4th refutation that I want to discuss, and because it is the most important (in my opinion), I would like to dedicate an entire post to it. The accommodationist position neglects an important segment of the audience – those who are de facto atheists but who do not see themselves that way, or who think it is better to “live and let live” rather than oppose religious ideas. I have my own private suspicions as to why that might be the case (mostly revolving around the fact that the “Diplomats” tend to be the “live and let live” types themselves), but regardless of the reasons why, this camp is largely ignored by the “Diplomat” approach.

I’ve spent a considerable amount of time on why I am not content to just let people believe whatever nonsense they want, and to illustrate how differences in understanding can lead to disastrous consequences. To summarize for those of you that haven’t been here that long, it is important to vigorously oppose bad ideas (of which religion is one), especially when following those ideas can lead individuals and societies into dangerous territory, and especially when there are those people zealously promoting those bad ideas. Having a shared way of understanding the universe and being willing to toss aside bad ideas can allow us to live harmoniously alongside our fellow human beings, whereas a “live and let live” approach simply silos people into tolerant but disagreeing camps.

I can remember the point at which I was pushed from being a “live and let live” type into a “we have to do something” type – it was when I watched the closing monologue of Bill Maher’s Religulous. Bill lays out a cogent argument for why it is not sufficient simply to leave well enough alone – religion is fueling destruction and widespread suffering among millions (if not billions) of our fellow creatures – it is no virtue to stand aside in the name of “tolerance” in the face of such suffering. That was the deciding factor for me, and I haven’t looked back since.

It is precisely for this reason that confrontational and assertive argument is necessary. While playing nice with the believers is all well and good if you want to make friends, if you are in the business of reducing the harm that religion causes then not only must we convince people to move away from belief, but to press those who merely do not believe to begin to voice their objections. Fence-sitters can be moved off their perch by showing them “look, not only is it absurd but it’s harmful”. “Diplomacy” fails to address this argument, stopping short of calling a spade a spade, and landing in the morass of “religion is okay, but fundamentalism is dangerous”.

There is also something to be said for the reinforcement and encouragement of those that are already in your camp. Insult and mockery can be a “pep talk” for other atheists that are perhaps too shy to speak up on their own. It can be incredibly comforting to those that are surrounded by believers to hear their innermost thoughts expressed in a way that vindicates their own godlessness. “Diplomats” don’t speak to this group, but it is important to do just that.

This also overlaps with the idea of being “counterproductive”, and touches deeply on why I hate that word so much. If we can use our rhetoric to motivate more people to speak openly, this can have a cumulative effect. A chorus of voices are created that are articulating an anti-religious position, which creates strong normative pressure on the status quo. This is where our argument begins to take on the strength of non-rational forms of argumentation, because we add a component of popularity to the underlying core of rationality. As religious belief is no longer seen as the norm, but rather simply one alternative to no belief, faith loses its status as an idea that is above criticism.

It is for this reason that I am incredibly irritated when atheists begin telling each other that they’re “doing it wrong”. It is crucial to the advancement of any position that a variety of approaches are available. Some people feel most comfortable finding common ground with their opponents, then exploring where the differences are. That is a useful and valid approach, but it is not the only one, nor should it be considered the “best”. Others find it easiest to express themselves in strong language, reveling in conflict and clever mockery. This too is a valid way of articulating a position, and can have an audience outside of simply those who oppose us. Why would we undercut ourselves and take away a valid form of debate?

There are no good reasons.