This year for Black History Month, I have decided to do a bit of research into black history in my home and native land, Canada. Since there are 4 Mondays in February, I am going to focus on 4 different regions of the country. This week, I am focusing on British Columbia, the land of my birth and where I currently reside.

British Columbia joined the Canadian federation in 1871, four years after Canada became a country. A coastal province, much of British Columbia is covered in thick forests, the result of abundant rains coming from the ocean and falling on the windward side of the Rocky Mountains. British Columbia is predominantly populated by the descendants of British immigrants, including English, Irish, Scottish, and even many Germans and Dutch. A more recent influx of South Asian (Indian and Pakistani) immigrants has been matched by one from China, Japan, and Korea. In fact, the history of British Columbia cannot be told without making repeated reference to China, as workers from China connected the province to the rest of the country through construction of the railroad. This construction should not be thought of as some sort of equal partnership between the British and Chinese, but rather immigrants leaving their homeland and facing dangerous work for little pay, working for British-Canadian companies.

However, this view of history does neglect the meaningful contributions that black immigrants and Canadians have made throughout the province’s history. To be sure, the black population of British Columbia has always been vanishingly small. However, in my pokings around the internet, I discovered that the first governor of Vancouver Island was a black man, one Sir James Douglas. It’s the result of the fact that he was a Hudson’s Bay Company man that we know so much about his life – the Bay was the single largest corporation in the territories at the time (of a relative scale to the British East India company).

Reading his history, I am reminded of One Hundred Years of Solitude by Gabriel Garcia Marquez – the story of a people who come to a ungoverned wilderness and through backbreaking labour manage to wrest it into a thriving community, while being beset with the consequences of their own human foibles:

As senior company officer west of the mountains, Douglas encouraged the traders at Fort Langley to supplement fur exports with farm produce and other commodities. Knowing that the innovations on Vancouver Island would in time destroy the fur trade, he jealously guarded the company’s rights in New Caledonia, on the mainland. He scrutinized the company’s civil and military expenditures in the island colony, and paid into a trust fund all revenues from sales of land, timber, and mines.

A fur preserve boasting a single stockaded fort only a few years before, Vancouver Island was now a colony with limited representative government. Compared with neighbouring Washington Territory where land was free, the colony’s population was small, but it lived in peace without Indian warfare. Through Douglas’ efforts, large-scale farming, saw-milling, coal-mining, and salmon fishing had been established. He had plans for government buildings for his diminutive capital, and was endeavouring to have Esquimalt become a naval base. His accomplishments offset the criticism of his rule by Blanshard, Cooper, and Admiral Fairfax Moresby before the select committee of the British House of Commons in 1857. When the government converted Vancouver Island into a crown colony in 1859, the governor it chose was James Douglas. It was already known in London in 1857 that gold had been discovered on the mainland, still under HBC control. A colonial officer of Douglas’ experience would be a good man to have standing by.

“I spoke with great plainness of speech to the white miners who were nearly all foreigners representing almost every nation in Europe,” he reported to the Colonial Office on 15 June 1858 after his first visit to the goldfields. “I refused to grant them any rights of occupation to the soil and told them distinctly that Her Majesty’s Government ignored their very existence in that part of the country, which was not open for the purpose of settlement, and they were permitted to remain there merely on sufferance, that no abuses would be tolerated, and that the Laws would protect the rights of the Indians no less than those of the white men.”

History likes to make heroes of its great men, and so we must be careful when viewing the accomplishments of Sir Douglas. I am sure that the miners had no shortage of criticisms for the heavy-handed enforcement of company policy by this foreign Guayanese half-breed who had managed to get himself appointed governor. While he appears to be defending the native people in the above quotation, he had a long series of struggles and what would be, in today’s view, be called abuses with the Native population. There was apparently little love lost between Douglas and the various Native bands that inhabited the area. I don’t doubt that Douglas’ own view of them was steeped in the anti-aboriginal racist attitudes of the time, but it is still commendable that he at least appeared to consider them as equally deserving of rights and protections as the white miners. To the extent that he viewed them both as interlopers on Her Majesty’s rightful lands… well let’s just say he’s not a saint.

What’s curious (may not so much) and interesting about the linked writeup is that it makes nearly no mention whatsoever of the fact that Douglas was black. To be accurate in a mathematical sense, he was “half” black, but by the standards of the time he would have been considered black. He was an advocate of the abolition of slavery:

He was disturbed by the presence of slavery. “With the Natives, I have hitherto endeavoured to discourage the practice by the exertion of moral influence alone,” he informed the company in London. “Against our own people I took a more active part, and denounced slavery as a state contrary to law; tendering to all unfortunate persons held as slaves, by British subjects, the fullest protection in the enjoyment of their natural rights.” In 1849 he ransomed a slave with goods worth 14 shillings.

This account is somewhat confusing, as the British Slavery Abolition Act was signed in 1833, before the supposed “ransoming” of the slave. There may have been de facto slavery still practiced in British Columbia after the act was signed, or the date might be confused with an earlier time. At any rate, Douglas’ story is an interesting one.

While Douglas’ story is interesting, there are a couple of others I found particularly cool. The first is of the area formerly known as “Hogan’s Alley”. This is an area of Vancouver that technically still exists, although it looks a bit different from then: 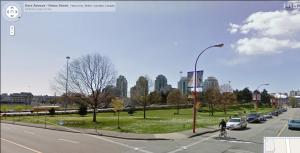 This was an area settled by newly-arrived blacks in the early 1900s, many of whom had jobs as railway porters. It is still very proximate to the train station, but the area was mostly wiped out by the construction of the Georgia/Dunsmuir viaducts (which can be seen in the background of the picture). You can actually see my old apartment in this particular shot.

There’s more information about Hogan’s Alley and some more famous names from British Columbia’s black history at this link, as well as info about a few events that I am going to try and check out.

Next week, the prairies.