If you’re reading this, then I survived a deadly overdose on sleeping pills. It wasn’t my iron constitution, survival instincts or even the quick work of trained medical professionals that saved my life; no, it was the fact that I used homeopathic sleeping pills.

Many of you have probably heard of homeopathy, but don’t really know much about it – this is how they make money. Like Scientology, the explanation is so stupid that once you know about it you can’t believe anyone buys into it. Basically, homeopathy operates on the principle that “like cures like” – for example, an herb that causes fever symptoms is a good cure for fever. The secret is that the substance must be super dilute, and the more diluted it is, the stronger it becomes. Avogadro’s constant (6.02 x 10^23) describes the number of molecules present in a mole of the substance in question – there are, for example 6.02 x 10^23 molecules of O2 in 38 grams of oxygen gas. What this means is that if you dilute something past 23C (C is a number which denotes the number of 100X dilutions a substance has undergone), there is essentially zero chance of even one molecule of active substance being present in the “remedy”.

Many homeopathic drugs are diluted to 30, 100, even 1000C – a sphere of water the size of the entire universe wouldn’t even contain one molecule of the substance. Homeopaths counter this by saying that water has “memory”, and can “remember” what was diluted in it. How it distinguishes between the herbs you want and the thousands of animals that have peed in it, the rocks it has passed over, and the other homeopathic remedies that have been in the same water (more dilute, therefore much stronger) is a question for which an answer has never even been attempted.

For a better explanation of how homeopathy works, go to this website: http://www.howdoeshomeopathywork.com/

It’s no exaggeration to say that homeopathy is completely useless. It couldn’t possibly work without re-writing the entire understanding of chemistry and physics, developed over hundreds of years. Even still, it has been tested – it doesn’t work. While a handful of “studies” (no control group, no proper blinding, small sample size) have shown a small effect for homeopathy – an effect that is much smaller than the claims that are made by homeopaths – every single rigorously-controlled study has shown it to be no different than a placebo. You could give someone a glass of water, tell them it’s homeopathic, and get the exact same result as if you put a drop of onion juice in it then diluted it a billion times.

However, despite the fact that it can’t work, and that it doesn’t work, people still buy into homeopathy in a big way. Walking the streets of Vancouver, it’s easy to stumble across a “natural” pharmacy that sells herbs, vitamins, and of course homeopathic preparations. Homeopathy is a multi-billion dollar industry – essentially the largest legal scam ever perpetrated (aside from, perhaps, religion) – separating desperate people from their money one vial of water or bottle of sugar pills at a time.

What did I do?

On Wednesday, October 27th, I participated in a mass suicide bid along with a handful of other Vancouver skeptics, organized through CFI Vancouver. I went to Finlandia, a naturopathic pharmacy on Broadway, to procure myself some homeopathic sleeping pills. I presented myself to the person behind the counter as a person suffering from insomnia, and curious about homeopathy (which, I would imagine, is a fairly reasonable case study). Without hesitating, the naturopath behind the counter pulled down a bottle of Neurexan, described on the bottle as a “Homeopathic preparation for the treatment of sleeping problems”. 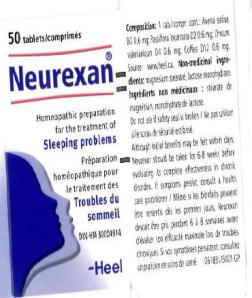 You’ll notice that the non-medicinal ingredients are sugar. Nothing else, just sugar. The suggested dose is 3 pills, so consuming the whole bottle would be about 16 doses of sleep meds.

As I would do with any new medication, I asked a few questions:

If you go to a pharmacy and they tell you that the dose doesn’t matter, that you should just take a bunch extra if you miss the protocol, that there will be no adverse effects at all regardless of your previous medical experience, and that it’s impossible to overdose, make sure you haven’t stumbled into Bizarro world. Such advice from a real pharmacist would be recklessly irresponsible, which is why you get specific instructions when you buy medications.

I honestly don’t think that Jane (not her real name) was out to defraud me. I’m certain she believes that homeopathy works, as do her bosses. However, personal belief is not enough when you have someone coming in with a real medical problem. I might believe that punching you in the uterus will fix your infertility problem, but would you let me? Should you let me? Should you let your sister or wife or mother come to my uterus-punching clinic because she believes it too? No, what you’d likely do is demand some proof from me that it works – proof that you’d examine closely because of how implausible my “treatment” is.

While not the same as an uppercut to the babymaker, the bottle of pills cost me $18 – that’s some expensive sugar! On my way out of the pharmacy, I grabbed myself a copy of this little gem:

You saucy little minx – tell me how it’s the pharmaceutical companies that are defrauding me by selling me stuff that’s been shown to actually work. I’ll believe anything that you and your smoking bottle of pills tells me.

I met up with a group of CFI Vancouver skeptics in front of Vancouver General Hospital. They had all brought their own homeopathic concoctions, including a popular homeopathic flu medication, sleeping pills, arsenic pills and belladonna (the latter two being highly toxic when undiluted). All of these were available from places like Choices and Whole Foods – none of them were particularly cheap. At the appointed hour, we opened our bottles of pills and tossed back the entire thing.

To be clear, if you did this with sleeping pills that you could get as a prescription, or even over-the-counter things like Tylenol, cough medicine, antihistamines, pretty much anything you could get in a real pharmacy, you’d probably die. Even if you didn’t die, you’d be sick as a dog as the pharmaceuticals do what they do inside your body. Even if you didn’t get sick, you’d most assuredly feel something – high, woozy, drowsy, hyper, something. The most likely outcome of downing a whole bottle of sleeping pills is death.

What did we learn?

We are not the first group to perform this stunt – a group out of the UK called the 10:23 Campaign first did this on January 23, 2010 as a massive protest against Boots, a naturopathic pharmacy. Since then, the National Health Service (NHS) has called for the stoppage of funding for homeopathy with public money, doctors have petitioned the government to stop licensing homeopaths, and a great deal of light has been shone on this shadiest of practices.

Here in Vancouver, naturopaths are being given diagnostic and prescription privileges. People are flocking to places like Finlandia on the mistaken assumption that the stuff in the bottle does what it says. Homeopaths are banking on a combination of the scientific ignorance of the populace and the veneer of respectibility that accompanies being called a “doctor” to push placebo medicine to desperate people. They compound this by railing against the pharmaceutical companies and the government health regulators, stirring up hostility against the scientific community at large. In fact as a skeptic, it is almost inevitable that you will be accused of being a “Big Pharma Shill” when you bring up the fact that most “alternative medicines” don’t actually do anything (or at least they don’t do what they claim).

The predictable response from those who endorse “alternative” or “natural” medicines is to say “what is the harm? If people think it makes them feel better, why tell them otherwise?” I’ve dealt with this question before, which is to say that the truth is important if we are going to live in a society with other people and make decisions that affect each other. In this particular case though, there is a more tangible cost. This website lists cases of people who died or were seriously injured by belief in quack medicine. Obviously no treatment is perfect, but to convince people to forgo treatment that has a chance of working because you want to sell them something that doesn’t work is tantamount to abetting involuntary suicide.

Another tired trope is that homeopathy only works on some people. It’s quite the coincidence that none of the people who have tried the overdose or who have been observed in carefully designed clinical trials are the ones who it “works” for. The whole point of a study is to control for random differences between people, so that the only difference is the treatment you’re giving them. It would have to be the mother of all coincidences that nobody in these rigorous studies, nobody in our group, and nobody in the 400+ skeptics in the 10:23 campaign felt any effect in the slightest. It would have to be coincidence if it worked – but it doesn’t. The easiest explanation is that homeopathy is just water, with no more “medicine” in it than what comes out of the tap.

We were lucky as well to have the entire thing videotaped by CBC Marketplace as part of their exposé on Boiron, the largest manufacturer of homeopathy in Canada. The episode is due to air this Friday at 8 pm, so you should check it out. I’m not sure if I got on TV or not. Hopefully our merry band of skeptics can help convince people that spending any money on homeopathy is a complete and total waste, because it doesn’t do anything.

Incidentally, I slept pretty much the exact same as I always do that night. I woke up around 3:00 in the morning, rolled over and went back to sleep.

TL/DR: Homeopathy doesn’t work either in theory or in practice. Taking an entire bottle of pills doesn’t have any effect. Homeopaths are defrauding people and giving them sugar pills instead of real medicine.

Make sure you read part two of this saga.