Chained by his neck to two female protesters, University of Waterloo doctoral student Dan Kellar was nevertheless in control of the situation at a campus lecture hall last week, as he sat on stage and chanted slogans to prevent journalist and author Christie Blatchford from speaking about her new book on the native protests at Caledonia, Ont.

I’m not just pissed off because the asshole in question is from my alma mater.

Ms. Blatchford, the Governor-General’s literary award-winning writer of Fifteen Days, was slightly delayed by traffic on Friday, and as university spokesman Michael Strickland announced this to the small audience, he was shouted down with calls of “racist, racist, racist.”

I’m not just pissed off because this asshole is trying to advocate a position that I consider similar to my own, or that I will be lumped in with his assholery.

I’m not just pissed off (although I am mightily pissed off) that free speech is being run over roughshod by a dick, using the principle itself to deny another person the right to speak.

No, all of that would be tolerable. I could deal with these insults and more. The reason I’m really pissed off?

Bike lock, $28
Rent-a-protest, $150 pizza bill
Suppressing the free speech of someone you don’t agree with, priceless.

This asshole has forced me to agree with Scary Fundamentalist. Come on, man! That’s beyond the pale. It’s like when the NAACP got all hot and bothered about Shirley Sherrod and I had to be on the same side as Glenn Beck. I had to take an extra-hot shower after that. Now I’m in the same camp as Scary? C’mon dude! Not cool.

I joke, of course. While pretty much everything that SF says makes me want to ragevomit all over my keyboard (I wear a bib when browsing his site), we are definitely allied on the cause of free speech. Free speech has nothing to do with left or right – it is the only way that a democratic society can work. Where we differ is on… well… everything else.

I don’t care what your position is, whether or not I agree with it, and I am absolutely not above criticizing the assholery of those who are on my end of the political spectrum. You don’t get to be a total douchehat and lock yourself to a podium to protest someone’s speech. Tearing down a building, maybe. Protesting against the government, sure. But to prevent someone from speaking? That’s bullshit.

Usually I’m a bit more articulate than this, but quite frankly, I’m too pissed off to be clever. I also try to have a pithy little signoff at the end of these things, but I can’t think of one, so here is a picture of Johnny Cash expressing exactly how I feel about Dan Kellar. 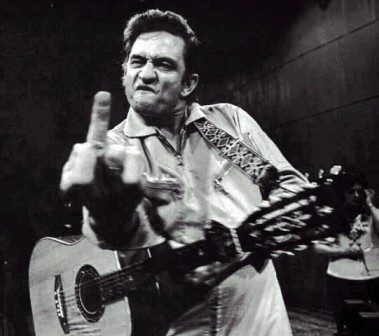