On Friday, June 4th, Vancouver was the recipient of Dr. Deepak Chopra – quantum mystic, magic thinker, and purveyor of high-quality woo. In the interest of promoting the cause of evidence-based science and thought, skeptics from Vancouver’s chapter of the Center for Inquiry were on hand to engage the audience on their way into the event. We were armed with flyers (which can be seen here), and voices of reason. For more background on the event, you are invited to read the pre-event coverage from this blog.

Why were we there?

To answer this question, I think it’s worthwhile to mention a couple of things we weren’t there to do.

We were not there simply to tell Dr. Chopra he is wrong; while he undoubtedly is wrong, it’s not exactly productive to shout that at people who are willing to part with $100+ dollars to hear the man speak. Besides, why should anyone believe us just on our say-so?

We were not there to smugly tell people that they are stupid for going to see Chopra speak; people are often willing to listen to leaders who sound like they have answers. If nobody challenges those answers, or the leaders are convincing enough, it’s easy to get caught up. Most likely the people who attend Dr. Chopra’s shows aren’t any more stupid than your average cross-section of humankind.

We were not there to ‘convert’ anyone to skepticism, or convince them to abandon their tickets and do something else; most people are skeptics in one sphere of their life or another – it’s how we discern truth from lies. The problem is that people don’t necessarily apply the rules of skeptical inquiry to all aspects of their life, and are happy to accept some things on faith rather than looking for evidence.

What we were there to do is to try and engender a little bit of cognitive dissonance in members of the audience. What we were there to do is try and encourage people to keep their thinking caps on while listening to Dr. Chopra’s ideas, and to ask “does this really make sense?” What we were there to do is demonstrate bodily that it is not okay to invent supernatural explanations for the important questions in life and then sell those as snake-oil cures to people who honestly thirst for knowledge and answers to the mysteries of the universe, and that there will always be people who will insist that claims about the world must be substantiated by evidence, not circular reasoning and invocations of unobservable phenomena.

What did we do?

An hour before the show was scheduled to start, members of CFI Vancouver, UBC and SFU Skeptics, and a few skeptical friends met at the Vancouver Public Library to gear up for the event. We had printed about 800 flyers, and had a few choice quotes wherein Dr. Chopra made specific claims about the natural world, the human body, or other physical phenomena that were demonstrably false. Dressed in our finest skeptical attire, we hit the sidewalk outside the Queen Elizabeth Theatre, site of Dr. Chopra’s presentation.

Since there are a number of possible entrances to the theatre, and we didn’t want anyone to miss out on the chance of getting a flier, we spread ourselves out along the sidewalk in small groups. 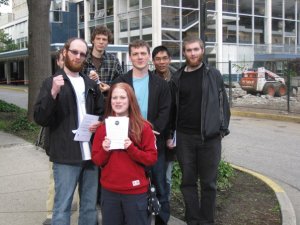 Our strategy was simple: ask people if they were on their way to the show. If they were, we asked if they wouldn’t mind talking to us for a couple of minutes before going in. We put a flier in their hands, and briefly explained what we were doing there – namely, asking them to think very carefully about some of the things they were about to hear.

We were careful to be as respectful and polite as possible, wanting to avoid the association of anti-choice activists protesting outside of abortion clinics. Nobody was harassed, intimidated (as if anyone was intimidated by a pack of nerds) or assaulted – merely annoyed for a moment.

How did it go?

It’s hard to say definitively what impact, if any, we made on the crowd. We didn’t hold out any great hope that we’d cause a wholesale changing of minds, or cause a surge of skeptical thought to bloom in the audience on the weight of our hastily-assembled fliers with cherry-picked quotes and facts. To be perfectly honest, we were half expecting to be instructed to leave the premises by angry security guards. What we instead saw was that most people, when handed a flier, took one and glanced over it.

Some people gave it a cursory look, folded it up and put it into a pocket or a purse. Some laughed derisively (“don’t these fools realize that there is more to the world than what can be observed and measured with evidence?”) and threw them away. One particularly offended young woman tore hers into pieces. Some handed them back to us with a disgusted look – I had a couple immediately turn and walk away the moment I said the words ‘think critically’. A very small subset of the audience members took the time to enter into a dialogue with us about the things we were saying.

Again, we were very careful to be deferential and respectful of people, even though we disagreed with their ideas. There is a time for polemic, and this probably wasn’t it. Most of those who spoke to us were very smugly dismissive of the idea that science could be based on observation of real-world phenomena. I foolishly took the bait with my first interlocutor when he asked me if I thought that was solid ground I was standing on. I foolishly allowed him to take me down the quantum path (and what are molecules made of? Okay, and what is energy?) until I wasn’t able to give him a satisfactory explanation of the fundamental components of the universe, at which point he smirked and said “so there you go” and walked off. My moment to be smug came a few minutes later when I directed him and his wife to the entrance – the fact that matter is mostly empty space isn’t much of a consolation when you can’t transport yourself through a locked door. What I should have said was “it doesn’t really matter what I believe I’m standing on. Let’s look at the evidence and see what it says.”

I was more prepared for my second encounter with a man who immediately accused us of raping Native people and destroying the land on behalf of the pharmaceutical companies. I pointed out to him that not only were we not there representing any large corporation or business interest, but the very fact that we were alive to have the conversation was at least in part due to the fact that disease and disability are no longer widespread concerns in this country. This is not a picture of him, but of someone else who was talking to us because he didn’t have a strong opinion for or against Dr. Chopra and wanted to know what all the fuss was about:

I’d like to share a couple of my favourite moments from the event. For some reason, I was wildly unsuccessful in giving away fliers. Everyone I tried to give one to either handed it back or, once they found out what it was, refused to take one. As a result, I spent most of my time checking on morale and observing what was going on. I saw a woman tearing up her flier, at which point her husband made a dismayed sound and ran back to a CFI team member and asked for another one – we think he didn’t want to be there to begin with.

The highlight of my evening was probably meeting Chris, a young (~25 y) Deepak fan who decided to figure out what we were all about. He asked us to produce a quote where Dr. Chopra said anything even remotely close to what we were claiming he represented. Our quote sheet was immediately thrust into my hand, and I supplied him with a line from Dr. Chopra in which he claims that all cells are immediately aware of every other cell in the body, and the universe at large (a gross misrepresentation of cell-cell signaling pathways). Chris immediately demanded that I prove that it was 100% false, and that it couldn’t possibly be true. This time, however, I was prepared. I asked Chris is anything could be 100% true to his satisfaction – Chris immediately informed me that it was impossible to know anything. I asked Chris to give me all of the money in his wallet, since he didn’t know if it was there or not. When Chris balked, I suggested that maybe a more reasonable standard than 100% certainty was possible and believable. It was very refreshing to converse with someone like Chris who was, despite their extreme rarity, one of those people who may believe in woo but is willing to concede a logical point. Where we left the conversation (so Chris could get to his seat before the show started) was that in cases where it doesn’t matter if you’re wrong – is there an underlying consciousness in the universe that we can’t understand? – then it was maybe not the worst thing in the world if you make up supernatural explanations; however, in matters of life and death, we deserve evidence to back up any claims. Chris said that he’d attend our next “Skeptics in the Pub” meeting and we’d pick up the conversation there.

Of course, the highlight of everyone’s night was when Deepak Chopra himself took a flier on his way into the theatre, read it, turned around, walked back over to the group and engaged in a pseudo-friendly discussion with our chapter head, Ethan. 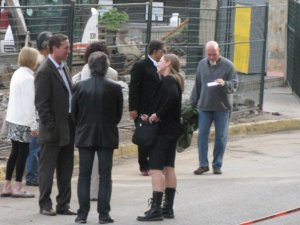 Say what you want about the man, but Deepak Chopra is not a coward – an intellectual midget definitely, but he was happy to come and talk to us without being angry or trying to drive us away… although he did suggest that skeptics were “too chickenshit” to debate him. I suggested that he cancel his talk and we would debate him in front of the audience; he didn’t seem to think that was a particularly good idea.

Overall, it’s hard to say how the event went. We gave out almost all of the fliers, the majority of which were read and not immediately destroyed. I’m sure a kung-woo master like Dr. Chopra was able to immediately paint us as angry malcontents stubbornly standing as obstacles on the road to scientific progress. It was for this reason that we didn’t carry protest signs and picket, and that we happily and politely answered questions. Most people don’t know skeptics, especially in a woo-friendly city like Vancouver. It was important, therefore, that they see us as we’d like to think we are – a bunch of nerds who are fundamentally happy people, but who believe that tough questions deserve real answers.

I don’t know if there was a Q&A session, or if anyone in the audience piped up with a skeptical query. I doubt it. Again, our purpose was not to immediately change minds or “debunk” Dr. Chopra. Our goal was merely to put the tools for skepticism – facts and cognitive dissonance – into the hands of the audience. I hope at least some people walked away from the show thinking “I need to check the answers against facts.” Meeting people like Chris – people who are reasonable enough to accept a logical argument even if it doesn’t completely change their minds –  gives me hope that maybe there can be progress made against even the woo-master himself.

UPDATE: Thanks to PZ Myers for posting this on his blog.